Wages Down. Profits Up - Australian Fabians

Wages down. Profits up. 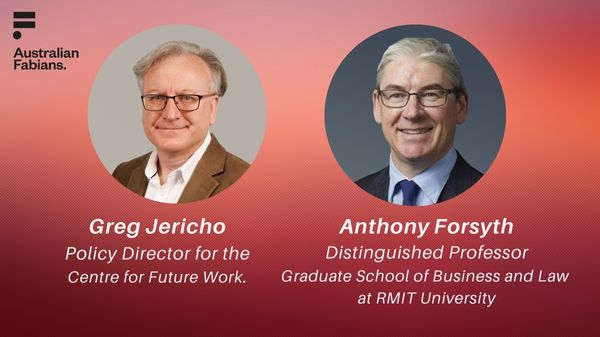 Real wages in Australia have been stagnant for many years, and now they are falling.

Between 2013 and 2020, wage growth in Australia was lower than at any time since the Great Depression. In 2021, real wages went down by 0.3% and, with surging inflation, the forecast for 2022 is further decline.

While wage growth has declined in most industrialised economies, wage stagnation in Australia stands out. In recent years, wage growth in Australia has been less than half the OECD average. That is despite Australia’s exceptional thirty consecutive years of economic growth.

So, where did the fruits of our economic growth end up?  Well … they ended up going to capital owners, in profits. In fact, the share of Australia’s GDP going to workers has declined steadily since 1979.

What has caused the decline in workers' share of Australia’s economic pie? What is holding back wage growth? What can be done to fix this situation?

Greg Jericho is the Policy Director, Labour Market and Fiscal for the Centre for Future Work. He has a PhD in English Literature from James Cook University, and an Honours Degree in Economics from Flinders University.

Greg writes a weekly column on economics and politics for Guardian Australia – a position he has held since 2013. In 2016 he won the Walkley Award for Commentary, Analysis, Opinion & Critique, and in 2018 he was a Walkley Award finalist with Gareth Hutchens for their report on the crisis of wages in Australia in the Best Industrial Reporting category.

Anthony Forsyth is a Distinguished Professor in the Graduate School of Business and Law at RMIT University. Anthony e-teaches and researches on all aspects of work and the law, specialising in collective bargaining, the regulation of trade unions, labour hire and worker exploitation.

Anthony is President of the Australian Labour Law Association and in 2015-16 was Chair of the "Victorian Government Inquiry into the Labour Hire Industry & Insecure Work". His book: The Future of Unions and Worker Representation: The Digital Picket Line was published in February 2022.