“What Do You Think?”: Talking to the Other Side - Australian Fabians

“What Do You Think?”

Talking to the Other Side

They say that religion, money, sex, and politics make for poor dinner conversation. I say that while not everyone needs to be “interested” in politics, it can be very rewarding to have a level-headed discussion about an issue when handled correctly, even when you don’t see eye to eye.

Do you have a relative, friend, or maybe a colleague or acquaintance whose political views get in the way of your relationship? Do you dread political conversations due to fear of argument, hurt feelings and anger?

There is evidence to suggest that as the mainstream media today continues to spin and misguide the populace through the imported American phenomenon of “Culture Wars”, we are edging ever closer to major political polarisation.

I am a keen advocate for preventing political polarisation from setting in at all costs. If left unchecked, it will eventually destroy the goodwill of our society much like it has in the United States. With the current COVID-19 climate and increasing friction on response approaches between our states, Australia cannot afford to stoop to American-style demonizing rhetoric that would fracture our family or friendship dynamics.

While our first priority should be improving media literacy, encouraging civil social debate, and calling out toxic media bias or extreme partisanship, McCoy’s research tells us that both political leaders and citizens must play a part in avoiding polarisation. She mentions that the ultimate means of depolarising politics is “addressing these debates head-on”.

I recently came across an American organization called Braver Angels, which is dedicated to bridging the divide between “Red” and “Blue” citizens. I took a deep dive into their work and applied some thought to the growing Australian political division. Braver Angels claim that political beliefs are often complex. A person can belong to a party and not agree with that party’s positions on all issues or candidates. Similarly, one can belong to no party and yet have an overall leaning to the left or right.

Before we can look at ways to handle political disagreement, it’s important to first understand how far gone Americans may be, and then to adopt a more open view of “Conservatives”, “Progressives” and “Others”.

Lee Drutman provides an excellent point of view from both sides of the US political debate:

“To the political left, Donald Trump is un-American: His xenophobic, racist rhetoric stands in opposition to the true American vision of tolerance. It’s an affront to our nation of immigrants, a country in which equality is written into our founding documents. Any Republican who supports or voted for him is guilty by association.”[2]

Australian “Progressives” are voters who lean to the political left philosophically on most issues (or on some issues critical to them), or who tend to vote for the Labor or Greens parties:

“To the political right, it’s the Democrats who are un-American. They denigrate our founding as a Christian nation and want to secularize everything. They want to sacrifice our sovereignty to globalist institutions under the guise of invented problems like global warming and to undermine our exceptional heritage by opening our borders to anybody, even those who want to blow us up. There is only one “real America” and it doesn’t include the coasts or cities where many Democrats live.”[3]

Australian “Conservatives” are voters who lean to the political right philosophically on most issues (or on some issues critical to them), or who tend to vote for the Liberal or National parties.

“Other” voters who do not lean either conservative or progressive may be registered as a member of any political party or have no party affiliation, and may lean conservative on some issues or candidates and lean progressive on others.

Here is a small process you can try the next time a political discussion comes about:

First, consider these thought positions, internal questions, and frames of mind before engaging in discussion:

Next, once you’re set on answers to these questions, use the diagram below from Braver Angels, entitled “Emotional and Intellectual Transformation of Depolarization”, to gauge your own situation. You may start on the left or in the middle, but you eventually want to be as far to the bottom right of the diagram as possible. 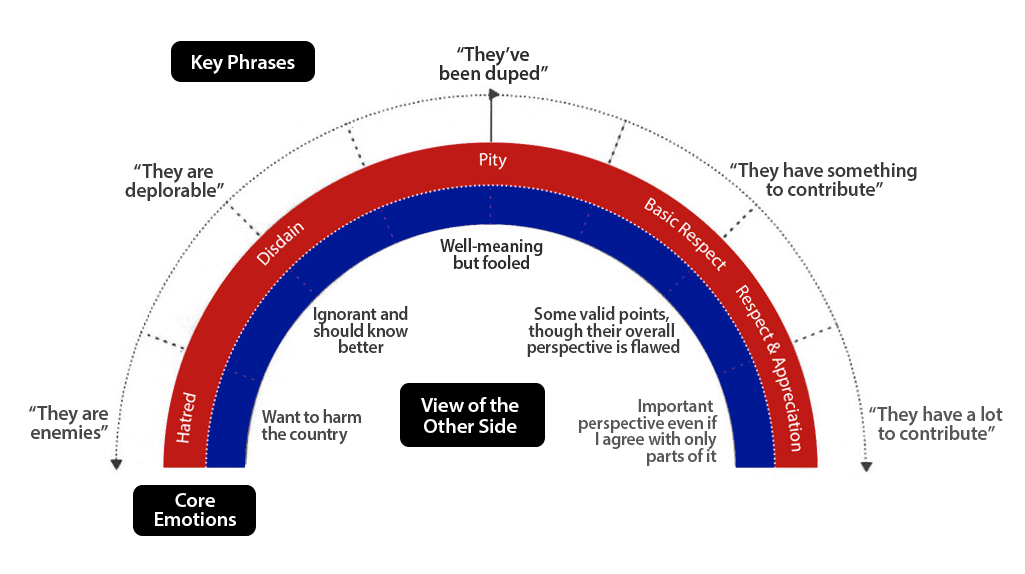 Finally, engage the person with a simple statement and question that focuses on the perspectives, feelings, and experiences of the other person. Be conscious of your tone and body language, and make sure you’re actively listening to their responses.  Here’s a few examples:

If you’d like to learn more about healing political divides, I strongly recommend checking out Braver Angels and their library to find further ways to help bridge any political disagreements in your life. I strongly believe that building the mental framework of critical thinking in Australian society now is paramount to avoiding the dangers of polarisation. It starts with people having these conversations, and educational institutions improving media literacy at all levels. If we let this continue to spiral, then I shudder to imagine what the Proud Boys storming Canberra with rocks and cricket bats will look like.

“What Do You Think?”

Fabian Monograph: An industrial policy for Australia: Economic and social priorities in a post-neoliberal and post-coronavirus era

Letter to Labor: The Future of Education

Ending Homelessness in a Crisis?