Do we need Socialism to address the Climate Emergency? - Australian Fabians

Do we need Socialism to address the Climate Emergency?

If you RSVP below you will receive an autoresponse email detailing how to connect to the Zoom on line meeting. 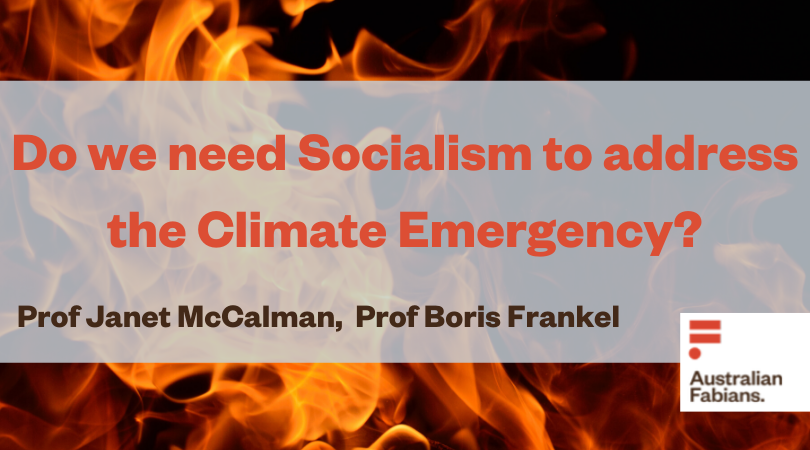 This will be the second event in Victorian Fabians’ Autumn Series for 2020 exploring ‘Socialism, Centrism and The Climate Emergency’.

Despite all the talk, the world is still rushing towards a climate catastrophe.

Attempts to coax, regulate and incentivise the private sector to deliver a green economy have so far met with limited success. Can this approach ever work? Or do the state and the community now need to step in and impose their authority with bold and sweeping public programmes?

In the USA the cry has been raised for a Green New Deal and in the UK for a Green Industrial Revolution. Both are seen as part and parcel of an explicitly socialist platform. Does Australia need a similarly radical approach? How would that translate to Australia’s traditions and current state? Would it be a socialist programme?

In this event we ask our speakers to address our questions about socialism through the lens of the climate emergency.

Professor Janet McCalman is developing, with Professor John Langmore, a proposal to the ALP for a Green Accord. John was MHR for Fraser in the Hawke-Keating government and the architect of the original Accord. Janet is Redmond Barry Distinguished Professor at Melbourne University and a leading figure in Australian Fabians. She is the author of three award-winning books: Struggletown, Journeyings and Sex and Suffering. For eight years she wrote a fortnightly column in The Age. Both are members of the North Melbourne Branch of the ALP.

Professor Boris Frankel is Honorary Principal Fellow at the Melbourne Sustainable Society Institute. In his latest book, Fictions of Sustainability: The Politics of Growth and Post-Capitalist Futures, he discusses the growing political contest between defenders of capitalist societies on the one side, and the policies and imagined futures advanced by green and socialist critics on the other.