Organised Labour and the Future of Industrial Action - Australian Fabians

Organised Labour and the Future of Industrial Action 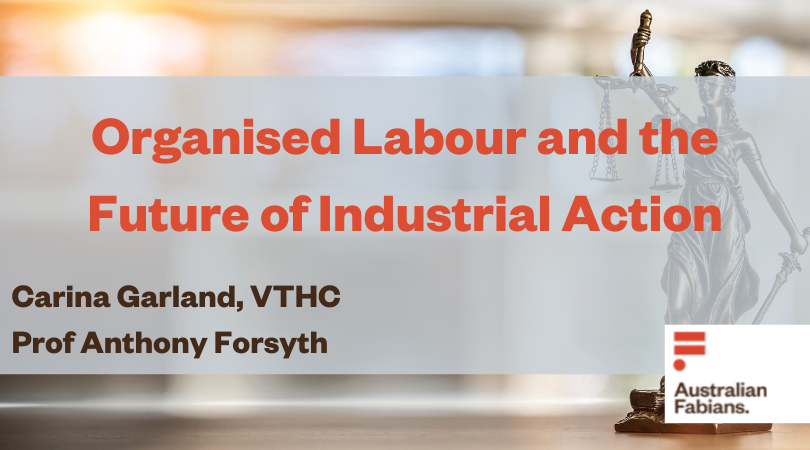 This is the first event in Australian Fabians, Victorian Branch, Spring Series: The Future of Worker Power.

In this series we ask what strategies can reverse the decline in worker power that we have seen over recent decades. Across three events, we will look at the future of Industrial Action, Industrial Strategy and Industrial Democracy.

Over the last forty years or so, the share of national income going to labour in Australia has fallen by around 15%, considerably more than the OECD average. The percentage of workers that belong to trade unions has fallen from about a half to a little over a tenth. The percentage of those in casual and insecure work has approximately doubled. The right to strike in Australia has almost disappeared, and the arbitration and conciliation system that once protected workers’ pay and conditions has been eclipsed by a faltering system of enterprise bargaining.

What strategies are going to reverse this decline, giving Australian workers access to good, secure jobs, with decent pay and conditions, and a fair share of the fruits of their labour?

Carina Garland is an Assistant Secretary at the Victorian Trades Hall Council. She is an outstanding campaigner for Australian workers, with many appearances in the media. Recently she has been getting stuck in on the issues of wage theft, migrant workers and the injustices of job-seeker. She has previously been a Communications Officer at the NUW, an electorate officer and a Lecturer at Sydney University.

Anthony Forsyth specialises in collective bargaining, the regulation of trade unions, labour hire and worker exploitation. He has written extensively on the future of unions. His forthcoming book will explore how unions and collective worker representation are responding to neoliberalism, economic restructuring and the ‘fissuring’ of work. He is a Professor in the Graduate School of Business and Law at RMIT, and founder of the Labour Law Down Under Blog.

Our speakers will discuss the winning strategies for organised Labour today.

Future Events in the Series: