Australia: caught in a U.S.-China conflict?

Australia: caught in a U.S.-China conflict? 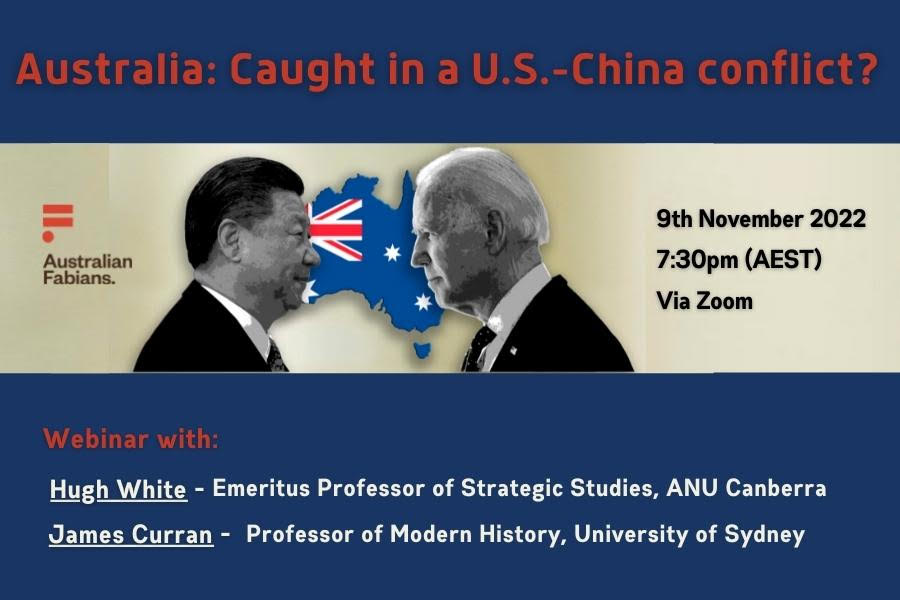 As tensions rise between the US and China rise, what are the implications for our future security and prosperity? What are the risks of a war over Taiwan? What is the place of AUKUS in all of this? How should we handle this difficult situation?

The Australia-China relationship is our most important foreign policy issue. China is our key trading and investment partner and an increasingly powerful influence in our region.  Amidst growing anxiety, it is becoming difficult to find balanced and contextualised analysis.

This is an opportunity for Fabians to hear directly from two experts in this vital area and to debate the issues.

Hugh White AO FASSA is author of the recent Quarterly Essay Sleepwalk to War. Australia’s Unthinking Alliance with America. He is Emeritus Professor of Strategic Studies at the Australian National University. and spent much of his career in the Australian Government.  He was the founding Director of the Australian Strategic Policy Institute, and from 2004 to 2011 he was Head of ANU’s Strategic and Defence Studies Centre.

James Curran is Professor of Modern History at the University of Sydney. A former analyst with the Office of National Assessments, he was a Fulbright Scholar in Washington DC and later Chair of Australian History at University College Dublin. He has authored a number of books, including Fighting with America: Why saying no to the US wouldn’t rupture the alliance.  He writes a fortnightly on foreign affairs for the Australian Financial Review.